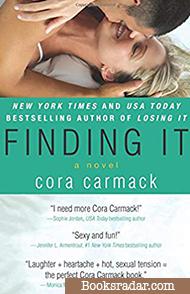 The Cora Carmack New Adult Boxed Set: Losing It, Keeping Her, Faking It, and Finding It plus bonus material
Losing It Series: Novellas Seeking Her
The Muse Series All Played Out
The Stormheart Series Bliss Edwards is about to graduate from college a virgin.

Fed up with being the only virgin among her friends, she resolves to lose it in the swiftest and most straightforward way possible—through a one-night stand.

Her plan is however easier said than done, as Bliss freaks out; leaving her potential sexual partner naked in her bed with the lamest of excuses.

What exactly could be more embarrassing than that?

Well, Bliss arrived in class to begin her last semester of college only to shockingly realize that her new theatre professor is the same guy that she left naked in her bed some eight hours earlier.

With her parents visiting soon on a surprise trip, the Millers could very well disown their daughter when they see her dyed hair, tattoos, and piercings.

Even worse is that they are expecting a perfect boyfriend, and not a guy with a neck tattoo who plays in a band.

Cade has had a struggling acting career ever since he moved to Philadelphia from Texas.

However, when approached by Max to play-act as her boyfriend, he gladly agrees.

When the acting seems perfect and the two are forced to keep up the pretence, the fake relationship gradually starts feeling real.

“Sometimes, losing yourself may be the only way of knowing who you truly are.”

Traveling around Europe for several months after college graduation with no responsibility, no curfews and no financial constraints sounds like a dream to most girls.

Kelsey Summers is living that dream except she isn’t having fun.

She is overcome by loneliness, so much that drowning herself in alcohol doesn’t seem to help.

Jackson Hunt however can be of help.

After a couple of coincidental encounters, the two decided to share the traveling experience together.

As Kelsey however discovers more about herself, she soon realizes that she knows very little about Jackson.

The Cora Carmack New Adult Boxed Set: Losing It, Keeping Her, Faking It, and Finding It plus bonus material

Buy now
Like
The Cora Carmack New Adult Boxed Set: Losing It, Keeping Her, Faking It, and Finding It plus bonus material

Losing It: Bliss Edwards is determined not to graduate from college a virgin. Her first time however ends up being an awkward one-night stand with her new college professor.

Faking It: In a desperate bid to avoid being disowned by her parents who are visiting town, Mackenzie Miller hires a fake boyfriend whom she ends up falling in love with.

Finding It: A lonely trip around Europe turns into an adventure of a lifetime for Kelsey Summers after she crosses paths with the mysterious Jackson Hunt.

Garrick Taylor and Bliss Edwards somehow managed to make it work despite having a complex and awkward past.

That’s why meeting their parents shouldn’t be a problem, right?

Things are however never that easy.

From the moment they land in London, challenges hit Garrick and Bliss from all directions.

From an unwelcoming future mother-in-law, to one setback after another, the couple soon realizes that they may not be ready for the future the way they had thought.

The only thing that is as hard as finding love, as it were, is keeping it.

Jackson Hunt is still struggling to find his place in the real world a couple of months after being honorably discharged from the military.

Although he needs a job to help keep his demons in check, the last thing he expected was to play the role of a bodyguard (and baby-sitter) to a spoiled rich girl named Kelsey Summers.

The job seems perfect, as it gives the ex-military man a chance to travel the world. The only problem is that Kelsey’s father doesn’t want her daughter to know that she is being followed.

As the rash and peculiar Kelsey however begins spiraling into patterns that Jackson suffered years ago, the strongman decides to offer his help.

Kalliope’s only purpose is to inspire.

Being an immortal muse, she is used by musicians, artists and actors to advance their art, while she also uses them to survive.

Having spent thousands of years living a lie, Kalliope is finally ready to settle.

Despite living for as long as she has, Wilder Bell is unlike anyone she has ever met.

Even better is that the sweet and sinfully attractive Wilder is neither an artist nor is he after using her for his own good.

However, there is only one problem: the longer she stays, the more obsessed Wilder will become.

Buy now
2
All Lined Up

Football and gossip come above everything else in Texas. Dallas Cole however hates football, and rightly so having spent her entire childhood coming in second to a sport.

College however presents the perfect opportunity to bury the past and make a fresh start.

Second fiddle quarterback Carson McClain is determined to earn his place in the starting line-up in order land a scholarship and secure his future.

His ambition is however distracted by a stunning redhead who literally falls into his life.

Dallas has no idea Carson is on the team and Carson doesn’t know that Dallas is the daughter of his new coach.

Both of them also don't know how to fight off their intense attraction.

Buy now
1
All Broke Down

Whether it’s an environmental issue, civil rights campaign, corrupt corporations or even politicians, Dylan has probably been involved in a protest.

When one of her recent causes lands her an overnight stay in jail, she meets another lost cause in Silas Moore.

A bona fide trouble maker, Silas is locked in a cell next to Dylan.

She is a do-gooder and he certainly doesn’t need a girlfriend to change him, until his rage and reckless nature threatens his place in the Rusk University football team—the one thing that he cares about.

Silas Moore does need fixing after all, and who better to do it than Dylan?

Buy now
1
All Played Out

A Straight A’s student, the first person in her family to make it to college and on course to graduate early, Antonella DeLuca’s has the perfect life—except for a social one.

Upon this realization, with just a couple of weeks left before her graduation, Nell creates a “to do” list.

First item on the list is to hook up with a jock.

Mateo Torres, the college’s wide receiver is a concoction of football, partying and more football.

When an attraction forms between Torres and Nell, the quiet and sexy college girl has to decide whether she still wants to play when it becomes more than just a game.

Legend has it that Aurora Pavan’s ancestors gained their mystical powers by facing a storm and stealing part of its might.

Although she has been raised to be the perfect queen, Aurora has yet to show any sign of the kind of magic she’ll need to protect her people.

In order to keep her secret and her crown, Aurora must tie the knot with a dark and menacing Stormling prince from another kingdom.

She however begins worrying about her future after startling secrets about him are uncovered.

But when she crosses paths with a striking young storm hunter who reveals that he possesses magic despite not being born with it, Aurora realizes that there could very well be a viable third option.

Her Kingdom or the man she loves?

Choices have consequences, and Aurora now knows this more than anyone else.

Desperate to find a solution, she joins a growing rebellion on the streets of Pavan; using her knowledge of the palace to support the revolution.

The Lockes are however just but the first of the many problems bedeviling Pavan.

The Rage season is on and the skies are raining down destruction.

It however doesn’t feel like Rage: this is a war.