Francesco "Paco" Chierici is a U.S. Navy veteran and author of the military thriller novel, Lions in the Sky.

During his years of active service in the U.S. Navy, he flew A-6E Intruders and F-14A Tomcats, and was even deployed to war zones such as Somalia and Iraq.

Paco was also posted aboard carriers such as the USS Ranger, Nimitz and Kitty Hawk, capping off his adventurous military career with an accumulated 3,000 tactical hours, 400 carrier landings, a Southwest Asia Service Medal with Bronze Star and three Strike/Flight Air Medals.

An alumnus of Boston University and a current 737 captain, Paco lives in Northern California with his beloved wife, Hillary, and two children.

Lions of the Sky 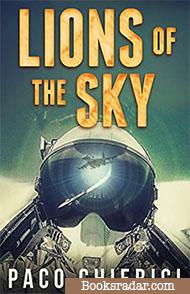 1
Lions of the Sky

In the world of fighter pilots, the most alpha of the alpha, competition is everything and the stakes are impossibly high. A Top Gun for the new millennium, LIONS OF THE SKY propels us into a realm in which friendship, loyalty, and skill are tested, battles won and lost in an instant, and lives irrevocably changed in the time it takes to plug in your afterburners.

Sam Richardson is a fighter pilot’s pilot, a reluctant legend with a gut-eating secret. He is in the last span of his tour as an instructor, yearning to get back to the real action of the Fleet, when he is ordered to take on one last class—a class that will force him to confront his carefully quarantined demons.

Brash, carefree, and naturally gifted, Keely Silvers is the embodiment of all that grates on him. After years of single-minded dedication, she and her classmates can see the finish line. They are months away from achieving their life-long dream, flying Navy F/A-18 fighters. They are smart and hard-working, but they’re just kids with expensive new toys. They’re eager to rush through training and escape to the freedom of the world beyond, a world they view as a playground full of fast jets and exotic locales.

But Sam knows there is a darker side to the profession he loves. There is trouble brewing in the East with global implications. If they make it past him they will be cast into a dangerous world where enemy planes cruise the skies over the South China Sea like sharks, loaded with real weapons and hidden intentions.