Donna Douglas is a British Sunday Times Bestselling author who has always been a passionate storyteller even before she could hold a pen.

At 40, Donna went on to publish her first novel, Waiting in the Wings, which went on to clinch the Romantic Novelists Association New Writers Award.

A fervent storyteller of women’s lives in the early 20th century, Donna currently resides in York with her husband and their two cats. 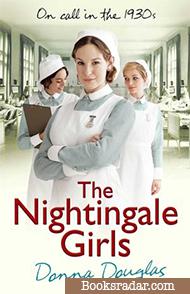 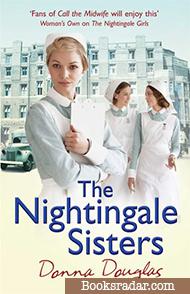 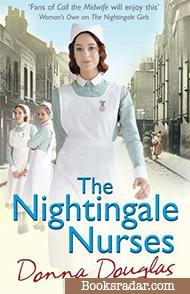 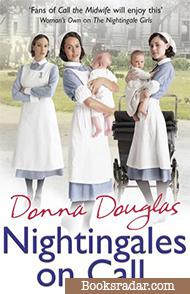 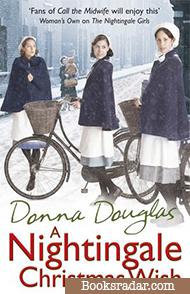 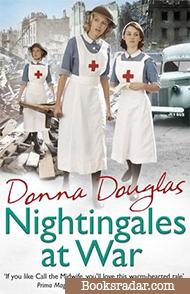 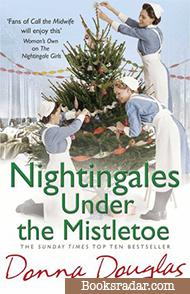 Nightingales Under the Mistletoe 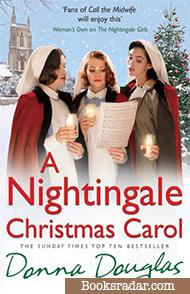 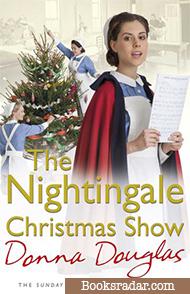 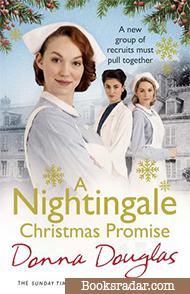 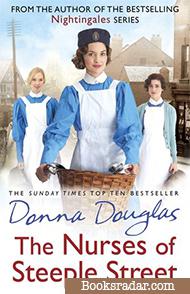 The Nurses Of Steeple Street 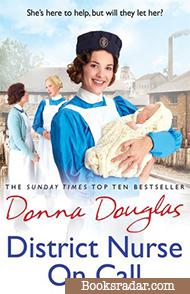 Three completely different girls register as trainee nurses at the Florence Nightingale Teaching Hospital in the autumn of 1934.

Dora, a resilient girl from the working class, aspires to get a better life for herself, but only if she can escape the claws of her evil stepfather.

Helen, according to her pushy mother, was born to be a nurse. However, under the demeanor of a seamlessly perfect student lies a great secret of heartache.

Millie, defiant in every sense of the word, is determined to be more than just a wealthy aristocratic wife. Yet life as a nurse is much tougher than she had presumed.

The three girls end up forming an improbable friendship. Which of them will become a Nightingale Girl?

The Nightingale Sisters follows the story of Dora, Helen and Millie who harbor the ambitions of becoming nurses at the Nightingale Hospital.

The demise of King George V in January of 1936 however brings with it great changes for the girls.

Dora finds herself stuck between choosing her future or her family after the absence of her evil stepfather brings financial difficulties due to one less wage packet. It also doesn’t help that she still hasn’t gotten over Nick who broke her heart.

Millie finds herself drawn to two men in her life; Seb, her fiancé, and Will Tremayne the dazzling doctor. She however questions where her future truly lies after forming an unexpected friendship with an elderly patient.

Violet Tanner becomes the latest addition at the Nightingale. Who is this new, mysterious Night Sister and what dingy secret is she hiding?

Sister Wren won’t rest until she unearths the truth.

The year is 1936 and it’s only six months left before Helen Tremayne sits for her final exams as a student nurse. Constance, her overbearing mother, is convinced that nothing will stand in the way of her daughter’s success; especially not her working class boyfriend, Charlie. Will Helen follow her heart or will she do whatever it takes to please her mother?

Millie is happily preparing for her wedding to Sebastian, her fiancé and foreign correspondent, when a fortune teller’s prediction turns her world upside down.

Dora on the other hand is devastated, as she has to watch Nick, the love of her life, be wed her pregnant best friend, Ruby.

She cares about her friend and is determined to forget about Nick, not knowing that Ruby is hiding a terrible secret.

The student nurses’ home gets a new ward maid in the spring of 1937. Jess Jago is determined to separate from her ill-famed East End family and make something better of her life. But will she be able to forget her past and free herself from the grip of her relatives who haunt her every step?

Effie O’Hara, who moved from a simple village in Ireland, is similarly optimistic of a fresh start. Her older sisters Katie and Bridget, who are nurses at the Nightingale, are however resolved to making their stubborn younger sister to conform.

Dora Doyle and Lucy Lane, presently in their third year, have been sworn enemies since their first day at the Nightingale. They nevertheless find themselves counting on each other for help after a dark secret threatens to end their careers.

Ward sister Frannie Wallace would love nothing more than to not live through another war like the one that took away the life of her beloved fiancé. This however seems highly unlikely, given how bomb defenses are going up everywhere in London.

Staff Nurse Helen Dawson is ready to love again after the death of her husband Charlie, but is she looking for happiness in the wrong place?

Matron Kathleen Fox is having a hard time motivating her nurses in the face of evacuation. Whereas everybody else is concerned about the future of Nightingale, Kathleen’s true fears lie in her own future.

With the country in the brink of war, the one thing certain is that nothing will ever be the same again at the Nightingale Hospital by next Christmas!

It’s the spring of 1940, right after the end of Phoney War, and the nurses of the Nightingale Hospital are willing to serve both King and Country.

Dora was convinced that she would never return to nursing after she married the love of her life, Nick Riley. Now a devoted mother, she returns back after her husband is enlisted to fight in France.

It sounded like a brilliant idea when best friends Cissy and Jen, sign up to assist in the hospital hoping to nurse handsome soldiers; up until they come face to face with the devastating effects of war.

Eve’s new job at the hospital helps her forget about the pressures of home, but her troubles simply won’t let her enjoy the newfound freedom.

For the nurses, their courage and friendships will face the real acid test.

Nightingales Under the Mistletoe

Buy now
6
Nightingales Under the Mistletoe

Much like the rest of Britain, the nurses of the Nightingale Hospital face a torrid Christmas as a result of the war during the winter of 1941. Several patients and nurses are relocated to a hospital in the Kent countryside.

Her old student friend Effie O’Hara from Ireland arrives at the countryside; determined that not even the war can prevent her from having a good time. But could she be hiding a secret?

Having lost both her father and husband to the war, Lady Millie Rushton turns to nursing as a way of gaining a sense of purpose; at least for the sake of her young son. A figure from her past will nonetheless instill doubts over her future.

With Christmas on the horizon, the three girls will learn that they can never quite run away from the past, no matter how far the travel!

“Dora Riley’s only wish is that her husband returns home safe for Christmas.”

The year is 1944, at the Nightingale Hospital in London.

While Nick is out fighting in the war, Dora is given the responsibility of overseeing a ward full of German prisoners of war. How could she possibly care for the very enemies they are fighting?

Kitty, a nurse who works with Dora, looks as though she is opening her heart to a German soldier, while Helen, an old friend of Dora, returns from Europe with a terrible secret.

Can the women look beyond their prejudices and personal problems enough to play their part for their country?
Author: Donna Douglas
First Release: 2017
ISBN: 978-1784750015
Publisher: Random House UK

The war may be over, but the wounds still remain even in the Christmas of 1945.

Matron Kathleen Fox is tasked with the job of rebuilding Nightingale Hospital, despite the fact that the buildings damaged by the war continually reminds her of the memories and ghosts of those lost.

She decided to organize a Christmas Show for the patients in order to spread the cheer of the festive season, but her idea is met by diverse feelings; being that the nurses are not yet over the effects of the war. Matters are also further complicated by the newly-formed rivalry between ward sister Violet Tanner and newcomer Assistant Matron Charlotte Davis.

It may have been designed for the patients, but could the Nightingale Christmas Show be exactly what the nurses needed?

While young men queue up to enlist for the army in preparation for the war, the Nightingale Hospital also undertakes its own form of recruitment.

Anna has had a more than a comfortable upbringing in her family’s bakery in Bethnal Green. Her father’s German roots will however come to haunt them.

Kate would love to become a doctor just like her father. Can she however fight both her family and the system in order to fulfill her dream?

Sadie signs up for the Nightingale Hospital in a desperate attempt to escape for the humiliation that comes with her mother’s drinking habits. However, what she doesn’t know is that escaping the legacy of her family isn’t as easy.

With the war drawing closer, will the cheer of Christmas help to unite the students?

The Nurses Of Steeple Street

The year is 1925 in London. Agnes Sheridan is a brilliant young nurse whose entire future is turned on its head by a tragic mistake. Determined to vindicate herself, she moves to Leeds to once again train as a district nurse.

But many at the house in Steeple Street find the Londoner overbearing; none more so than the Assistant Superintendent, Bess Bradshaw, who decides to teach her a lesson by assigning her to the Quarry Hill.

Agnes however draws closer to the area and the families, as she comes to learn that there is more to the slum than the chaotic life she imagined—and that there is dignity and contentment even in poverty.

It’s West Yorkshire in 1926. Agnes Sheridan, having completed her training in Steeple Street, is determined to make a difference in the lives of the locals by becoming the first ever district nurse in Bowden.

Her arrival however sparks suspicion by the locals who would rather entrust their health on the resident healer, Hannah Arkwright, than on Agnes who is quickly branded as yet another servant of the rich mine owners.

When the village is however thrown into chaos by the General Strike, the miners and their families precariously find themselves facing sudden hunger and hardship.

With this, Agnes finds an opportunity to prove where her loyalty really lies.

She must fight to earn her place in the village!