She is fueled by coffee, sinfully attractive bad boys, and everything that is hilarious, intentional or otherwise.

Callie has authored the All In Series, which is made up of four books, and a number of standalone novels which feature crossover characters just to make things exciting.

She currently lives in New York City with her family.

Callie loves hearing from her readers. As such, those who wish to connect with her should do so through her social media platforms. 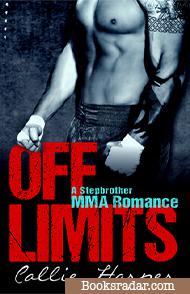 Off Limits: A Stepbrother MMA Romance 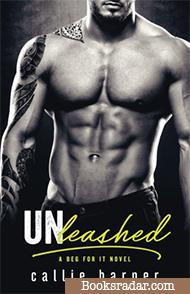 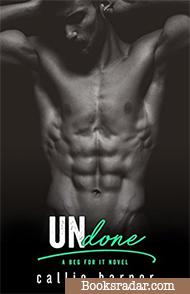 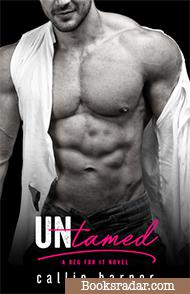 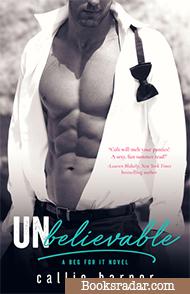 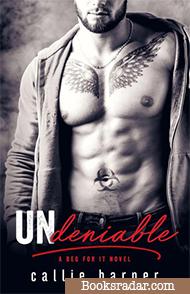 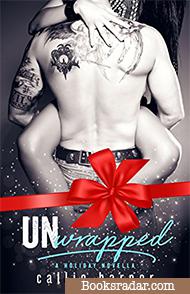 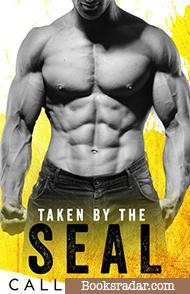 Taken by the SEAL: A Virgin and Navy SEAL Romance
All In Series 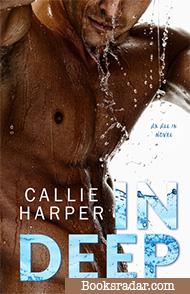 In Deep: A Sports Romance 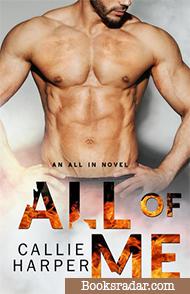 All of Me: A Firefighter Romance 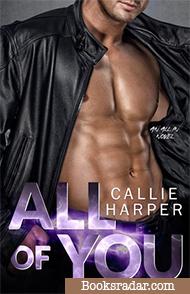 All of You: A MC Biker Romance All I Need: A Dark Alpha, Virgin Romance

Off Limits: A Stepbrother MMA Romance

Buy now
Like
Off Limits: A Stepbrother MMA Romance

Now’s my shot to fight for real, step out from my billionaire father’s shadow and be my own man. This summer’s all about going after my goal of becoming a pro MMA fighter.

The problem is the girl I want to f*ck. She’s driving me crazy with her little yoga outfits, her creamy skin, luscious curves and wide-eyed innocence. Normally, I’d hit it and quit it, get her out of my system and focus.

But she’s my new goddamn stepsister. And she hates me. This summer we’re supposed to spend eight weeks together living under the same roof.

I need to taste her. I won’t rest until she’s writhing beneath me, begging me to let her come. I’m a man who gets what he wants, and what I want now is Jewel.

I want him so bad it hurts. I’ve never felt this way before.

I’ve never had a problem keeping my distance from bad boys. The more muscles, tats and testosterone, the more I ran the other way. I learned my lesson, growing up with a trainwreck of a mother.

Tuck makes my panties melt. He keeps me up at night, twisting in the sheets, obsessed with fantasies while I touch myself.

But he’s my stepbrother. And he’s an alpha, dominant asshole.

We’re sharing a house and he’s walking around shirtless, every inch of him ripped with hard muscle, sweaty after his brutal workouts. I don’t think I can hold out much longer. I’ve always been the good girl, but he makes me want to be bad.

I never thought I’d see her again. The one I couldn’t have, the one I’d never forget. When I met her I had nothing, a lowly ranch hand working on her daddy’s land. She was the golden girl up on the hill, sexy as hell but beyond my reach.

Now, the tables have turned. I’ve amassed wealth and power and she’s come to me for help. A good guy would write a check, then send her on her way with a handshake and a smile. I’m not a good guy. I’m going to make a bargain and hold her to it.

One week. I’ll bail her out, pay off all her debts, but only after she gives herself to me completely. Seven days and seven nights of no-holds-barred submission to my dominance. I’m a demanding man with dark, relentless appetites. She’s unleashed the beast in me and I won’t stop until I possess all of her.

It was pretty easy being a rock god. Until I was caught ripping out the heart of America’s Sweetheart in a video gone viral. Now #HatePlayerAsh is trending on Twitter and I’m in desperate need of image rehab, fast.

Good thing the paparazzi chased me into that library. When I ducked around that desk, I found myself next to the long, sexy legs and disapproving gaze of Anika Ivanov. A children’s librarian. She’s perfect. All she needs to do is fake a month-long public romance, let the world see me fall hard for her, then dump me in a brutal, public display.

Now I just have to convince her to agree. And convince myself that the only reason I want to spend the month with her is PR. It’s not her full, luscious lips or her soft, seductive laugh or those fantasies I keep having of tying her down to my bed as I make her quiver and pant and call out my name.

What could go wrong?

Up here in the Vermont woods, no one knows who I am. I built myself a cabin, make furniture for a living and keep to myself, the big and burly mountain man with no name. Just how I like it.

Then she shows up, strutting in heels, tossing her silky, golden hair and smelling like vanilla and honey. She’s scouting our small town for some kind of reality show. She’s exactly the high-maintenance, gold-digging type I’m trying to avoid.

Only I can’t get Violet out of my head. All I want to do is haul her over my knee and see that pretty mouth of hers open with a pant, a gasp, and then a long moan. I’ve been living in the wilderness for a while now. If Violet sticks around, she’s going to find out exactly what it means to go wild.

When Caroline handcuffs herself in protest to the chainlink fence around my newest luxury real estate development, she thinks she’s sending me a message.

I get the message, but it's not what she has in mind.

With her wrists bound over her head, her luscious curves on full display, I want to keep her there all day. All night.

She may be spitting fire and giving me the middle finger, but all I feel are the sparks igniting between us. Her body doesn’t lie—I can tell she’s feeling the exact same heat.

Good thing I like playing with matches. It's only a matter of time until this friction between us erupts into a blazing fire.

She’s too young and innocent, from a world of wealth and privilege. I’ve seen too much, from far on the other side of the tracks. I told myself I’d stay away for her own good.

Four year later and she’s still not out of my system. I’m in the Special Forces now, living on the other side of the world, but I can still taste Gigi on my lips, still feel her skin under my hands.

I’m home on leave when I get the call. Her family’s business has pissed off a drug cartel. Her life’s in danger and her brother thinks I’m the one who can keep her safe.

On the run with Gigi, just the two of us, I won’t let anyone touch a hair on her head. But who’s going to keep her safe from me?

I’m the drummer in the Blacklist, and I’m only in New York City for the huge holiday charity gala. My plan is to zip in, make my appearances with the band, then jet off to Hawaii.

But there’s been a bit of a mix up. I’m staying in our lead singer Ash’s apartment. But his wife also gave her BFF a key.

Now I’m sharing an apartment for a week with a tattooed, curvaceous siren hell-bent on busting my balls.

She’s not impressed that I’ve been on the cover of Rolling Stone. Twice.

She’s not falling for the lines I usually don’t even have to use.

Sometimes the holidays get a little crazy. There's what you plan, and then there’s what happens. And some presents are too damn good not to unwrap…

Taken by the SEAL: A Virgin and Navy SEAL Romance

Buy now
Like
Taken by the SEAL: A Virgin and Navy SEAL Romance

Now that I've taken her, I'm never letting her go.

Taking Olivia hadn't been my plan. I'd been prepping my cabin in the woods for my own getaway.

I'm an ex-SEAL, but my instincts are still strong. One glimpse of her innocent, terrified eyes and I know I need to save her. I'd been working with the bad guys, but all it takes is one look at Olivia and I'm back playing the hero, rescuing the damsel in distress.

Now we're in my remote cabin, hidden away from the world. My little curvy virgin is looking up at me with a mix of innocence, fear and desire.

The need to possess is burning through my veins. She thinks she needs to escape.

She's not going to escape.

She's going to be mine.

In Deep: A Sports Romance

Emma is a blogger going for the scoop, and she has the perfect in. She’s gotten herself hired as his physical therapist. With all that intimate time together, the secrets from his past don’t stand a chance.

And neither does she.

NB: “In Deep” is a standalone hot, contemporary romance. It’s the first of four standalones in the “All In” Series, which can be read in any order.

Buy now
Like
All of Me: A Firefighter Romance

Seven years is supposed to change the way you feel.

Sophie’s not supposed to still dream about the way Liam touched her or the way they moved together. When she heads back to Naugatuck Island, she assumes Liam doesn’t even live there any more. Whatever he once felt, it has to have grown cold by now.

But Liam’s a firefighter. He knows better than anyone, never underestimate the power of a blaze. Those embers may appear cold, but nothing is ever as it seems.

Those embers? They're just waiting to burst into flames.

Buy now
Like
All of You: A MC Biker Romance

Night after night, Jax pictures her coming to him. In his dreams, Sky appears in the darkness, ready and wanting. But the night that finally happens, he finds out they’re in the middle of a nightmare.

Sky has nowhere to turn. Only one man can keep her safe, but he’s the most dangerous of them all. Her only choice is to put herself in Jax’s hands. Even if it destroys them both.

NB: “All of You” is a standalone hot contemporary romance. It’s one of four “All In” novels, which can be read in any order, with some crossover characters.

Buy now
Like
All I Need: A Dark Alpha, Virgin Romance

I was hired by his father to become his live-in caregiver. It sounded like an easy job. But the day I arrived at his broken-down Scottish castle I started to realize it might not be as easy as I thought.

I was not told that I'd be looking after a dark, brooding, rich man mired in a world of pain.

I was not told that this man would push all my buttons and test even my strongest limits.

I was not told that he was devastatingly gorgeous with a wickedly, sinful mouth.

I was definitely not told that what I'd end up feeling and what he would propose would drive me wild.

But I'm Annie and this is my new job. And damn it, I'm not going to let anything, even him, that gorgeous, sinful, delicious man, stand in my way.

You believe me? Don't you?