Harry Kemelman was an American professor and award-winning author of mystery novels.

He is best remembered for creating the fictitious religious sleuth Rabbi David Small.

Born in Boston, Massachusetts, he received his B.A. in English Literature from Boston University and his M.A. in English philology from Harvard.

Kemelman taught at several schools prior to the Second World War, worked as a wage administrator for the US Army Transportation Corps and the War Assets Administration during the war, before venturing into freelance writing and private business after the war.

He also taught at the Benjamin Franklin Institute of Technology in Boston, and the Boston State College.

Kemelman made his debut as a novelist in 1964 with Friday the Rabbi Slept Late, the first installment of the Rabbi Small Mysteries. The religious mystery novel received numerous accolades, including an Edgar Award for Best First Novel.

His books Friday the Rabbi Slept Late (1964) and The Nine Mile Walk (1967) both received film adaptations. 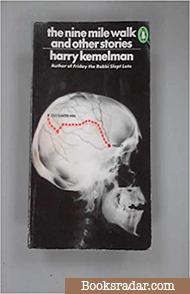 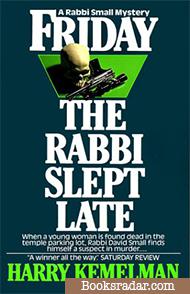 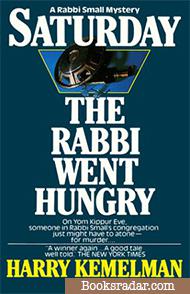 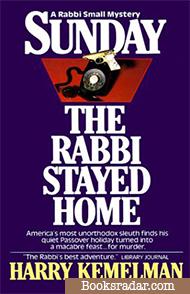 Monday the Rabbi Took Off 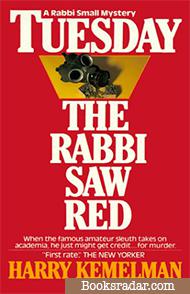 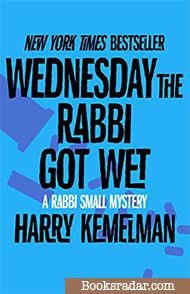 Wednesday the Rabbi Got Wet Thursday the Rabbi Walked Out 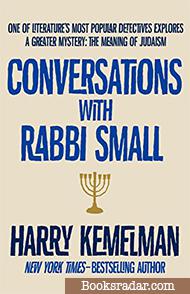 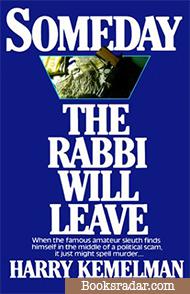 Someday the Rabbi Will Leave One Fine Day the Rabbi Bought a Cross 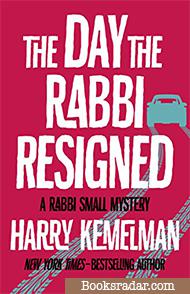 The Day the Rabbi Resigned That Day the Rabbi Left Town

Eight stories of murder, starring one of the most brilliant armchair detectives of all time from the author of the Rabbi Small Mysteries.

Before creating the widely popular Jewish sleuth Rabbi Small, Harry Kemelman authored a series of short stories featuring another quick-witted and wisecracking amateur sleuth: college professor Nicky Welt. Collected in The Nine Mile Walk, the Nicky Welt stories are a mix of ingenious logic puzzles and brilliant detective work, revealing that Kemelman has always been a master of the genre.

In the collection’s title story, Welt overhears a simple phrase: “A nine mile walk is no joke, especially in the rain,” and from this evidence alone he not only figures out that a crime is about to be committed, but also realizes how to stop it. Whether chasing a kidnapper or puzzling over a dead man’s chessboard, Welt is armed with the most powerful weapon on earth: the human mind.

David Small is the new rabbi in the small Massachusetts town of Barnard’s Crossing. Although he’d rather spend his days engaged in Torah study and theological debate, the daily chores of synagogue life are all-consuming—that is, until the day a nanny’s body is found on the rain-soaked asphalt of the temple’s parking lot.

When the young woman’s purse is discovered in Rabbi Small’s car, he will have to use his scholarly skills and Talmudic wisdom—and collaborate with the Irish-Catholic police chief—to exonerate himself and find the real killer.

The day before Yom Kippur, the synagogue sound system is on the blink, the floral arrangements are in disarray, and a member of Rabbi David Small’s congregation—in the Massachusetts town of Barnard’s Crossing—is terribly concerned with how much a Torah weighs. The rabbi is determined not to let these mundane concerns ruin his day of prayer and contemplation. But the holiest day of the Jewish year is interrupted when a member of the congregation is found dead in his car.

Details emerge that suggest the man may have killed himself, but the rabbi’s wife suspects murder. Which is it? Rabbi Small kicks into high detective gear to find out. His search for the culprit among the small town’s cast of eccentric characters leads to nail-biting suspense in this highly entertaining and engrossing mystery.

As Rabbi David Small’s 5-year contract winds down at the synagogue in Barnard’s Crossing, Massachusetts, some members of the congregation are plotting to remove him; others are whispering about starting a new temple of their own across the street.

When the rabbi gets an invitation to perform Passover services at a local university, he’s eager to get away from the bickering and spend a few days on campus. But instead of peace and enlightenment, he finds a murder wrapped up in drug deals and racial tensions.

From tuned-out hippies to political zealots, the college is full of potential suspects. Once again it’s up to the rabbi to draw on his deductive skills to solve the case—and avoid getting sucked into the bitter culture war—before the killer strikes again.

David Small has spent 6 years as the rabbi of Barnard’s Crossing, Massachusetts, and every year his job has been in crisis. In desperate need of time away, he embarks on a 3-month trip to Israel. He expects a relaxing, soul-nourishing stay, but wherever Rabbi Small goes, murder follows.

A bombing disrupts his vacation and the rabbi finds himself thrust into a world of terrorism and political discord in the divided city of Jerusalem. He teams up with an Orthodox Israeli cop to hunt down the terrorists before they can attack again. Dispensing Jewish wisdom as he employs his astute detective skills, Rabbi Small might be the only one who can crack this explosive case.

Once again, Rabbi Small finds himself looking for solace outside the confines of the contentious world of his synagogue in Barnard’s Crossing, Massachusetts. When a member of his congregation expresses that she does not want him to officiate her wedding, Rabbi Small has had enough. He seeks escape by dabbling in academia with a part-time teaching gig at a local college. But his fantasy of a tranquil life in an ivory tower is about to come tumbling down.

A bombing at the school kills one of the rabbi’s coworkers, and Small finds himself caught between adversarial students and feuding faculty members. As he investigates possible suspects with the same logic and measured caution that make him a brilliant religious leader, Rabbi Small finds that everyone has a motive—and an alibi—and it’s up to him to uncover the truth.

New Age thinking has come to Barnard’s Crossing, Massachusetts. The recently elected president of Rabbi David Small’s synagogue is intent on using temple money to build a meditation retreat. The congregation is practicing yoga, buying crystals, and reciting chants. When a troubled young man returns to the town after spending time in a controversial Hasidic cult, the rabbi expects him to be another New Ager. But things take a grisly turn away from new-fangled mantras of peace and love when something terribly old fashioned happens: murder.

An elderly patient dies after being given the wrong medication by the local pharmacist, who coincidentally is also the Hasidic man’s father. When the dead man’s family suggests the mix-up was intentional, both the druggist and his son become suspects and it’s up to Rabbi Small to investigate by drawing on some Old Testament wisdom in a village of New Age fads.

Barnard’s Crossing, Massachusetts, is thriving. Every year, more young couples move to this cozy New England village to raise their families, and many of them join Rabbi David Small’s synagogue.

But the town is jolted out of domestic tranquility when Ellsworth Jordon, the town selectman, is murdered. An outspoken anti-Semite, and one of the town’s richest and most powerful men, it seems like everyone had a reason to dislike Jordan. When he’s murdered, not even the rabbi is surprised.

Police suspicion falls on several upstanding members of the synagogue, so Rabbi Small endeavors to clear them the way only he can—with God at his back and the Talmud in hand. Surprises lurk at every turn as the rabbi narrows down the long list of suspects to find the killer.

In Conversations with Rabbi Small, the rabbi finds himself taking a well-deserved vacation at a Jewish retreat in the mountains, where he reads, plays cards, and furthers his studies, which have been languishing for too long. When the rabbi’s wife is called back to the city to deal with an illness in the family, the rabbi meets a curious young woman in the midst of a life-changing moment.

Joan is a gentile who is about to marry a Jewish man, and she is desperate for answers as she determines whether or not to convert to her betrothed’s religion. In Rabbi Small, she finds an ideal teacher. In a series of impassioned conversations, the rabbi guides her through the ancient mysteries and wonders of Judaism, giving guidance to both her and her husband-to-be. With humor and compassion, the rabbi shares the history, beliefs, and traditions that have linked Jewish people across the world for millennia.

Since becoming the rabbi at the synagogue in Barnard’s Crossing, Massachusetts, David Small has seen his congregation through a fair share of unholy bickering and corruption.

So when millionaire Howard Magnuson is elected president of the synagogue, the rabbi isn’t surprised that Magnuson wants to bring corporate efficiency to the temple—at the expense of religious tradition. Conflict flares when Rabbi Small refuses, on the basis of temple rules, to officiate the interfaith wedding of Magnuson’s daughter to a non-Jewish Boston politician, and the new president calls for the rabbi’s dismissal.

When another player in Boston politics is killed in a hit-and-run accident and the police suspect a Jewish college student, Rabbi Small fears the undergrad might have been set up—and that Magnuson is involved. The young man’s innocence and the future of the temple depend on Rabbi Small solving the case with his signature wit and Judaic wisdom.

Buy now
Like
One Fine Day the Rabbi Bought a Cross

Retired millionaire Barney Berkowitz, from the small Massachusetts town of Barnard’s Crossing, invites Rabbi David Small to come to Israel and bar mitzvah him, as Berkowitz never went through the ceremony in his youth. On what should be a joyous occasion—and an all-expenses-paid trip to the Holy Land—the rabbi discovers danger lurking in every corner and a conspiracy that threatens to destroy the state of Israel.

An innocent American has been murdered and when the sleuthing rabbi begins his investigation, he finds the death may have been part of an international conspiracy fueled by religious radicals and an arms-smuggling scheme. Anyone, from a liberal Jewish-American professor to a young religious fundamentalist, could be a suspect—and the rabbi must rely on his Talmudic logic and daring chutzpah to untangle the mystery and prevent an even more deadly attack.

After three decades of dealing with temple politics and getting involved with more than a handful of murder investigations, Rabbi David Small is ready to retire from his synagogue in the cozy Boston suburb of Barnard’s Crossing. For years, his secret desire has been to permanently take up teaching, but when he finally leaves the synagogue to pursue that dream, life at a university proves more dangerous than he thought.

Late at night, a notoriously ambitious college professor dies in a car wreck. The academic had been drinking heavily, but evidence suggests that the crash might not have been an accident. The local police are stumped and enlist the only detective they know whose astute eye and quick mind come from a higher power: Rabbi Small.

Buy now
Like
That Day the Rabbi Left Town

Retired from his job at the synagogue in Barnard’s Crossing, Massachusetts, Rabbi Small now teaches Judaic studies at a Boston college. Finally able to enjoy theological contemplation without the annoyance of temple politics, the rabbi is shocked when one of his colleagues is found dead in his car—and the clues at the scene point to murder.

The deceased English professor was notoriously selfish and held long-standing grudges against other members of the faculty, so the list of suspects is long. But when the rabbi who took over Small’s position in Barnard’s Crossing is implicated, it falls to Small to clear his name and find the true killer, one last time.