Elizabeth Marro is an American author of the women’s crime fiction novel, Casualties (2016).

Born in Connecticut, Elizabeth was raised in a tiny town in northern New Hampshire, which had a population of under a thousand people.

Although she left the North Country at the age of seventeen, Jefferson, New Hampshire still holds a special place in her heart.

In fact, she loves visiting the area–provided it isn't snowing heavily.

Elizabeth has an undergraduate degree from the University of New Hampshire and an MBA from Rutgers Graduate School of Management.

She has worked as a reporter for the Gloucester Daily Times, an editor for The Summer Sun, and has even made drugs for a living–the legal kind.

She is the proud mother of Rory Donovan, and the stepmother of Miki Marro Kearns.

Her work has appeared in The San Diego Reader, The Gloucester Daily Times, LiteraryMama.com, among others. 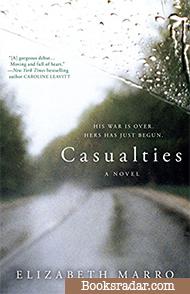 As an executive for one of the most successful military defense contractors in the country, Ruth Nolan should have been thrilled when her troubled son, Robbie, chose to join the marines. But she wasn’t. She was terrified.

So, when he returns home to San Diego after his second tour in Iraq, apparently unscathed, it feels like a chance to start over and make things right—until a scandal at work tears her away from their reunion. By the next morning, Robbie is gone. A note arrives for Ruth in the mail a few days later saying, “I’m sorry for everything. It’s not your fault. I love you.”

Without a backward glance, Ruth packs up Robbie’s ashes and drives east, heading away from her guilt and regret. But the closer she gets to the coast she was born on, the more evident it becomes that she won’t outrun her demons—eventually, she’ll have to face them and confront the painful truth about her past, her choices, the war, and her son.