Allie can always be found day-dreaming about how she’ll make her alpha males and alpha females meet halfway and live happily ever after.

Brothers of Ink and Steel Series 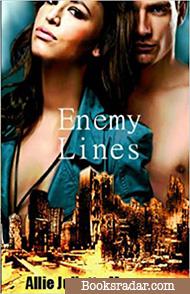 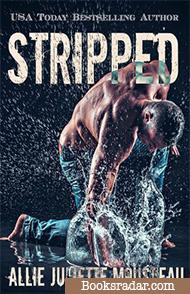 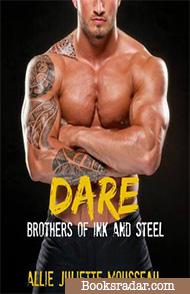 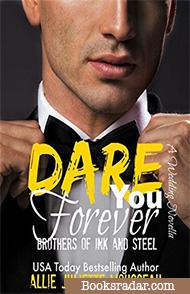 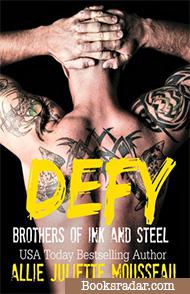 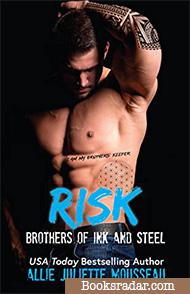 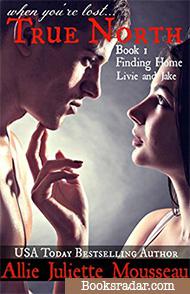 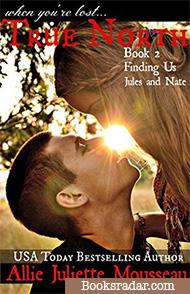 Finding Us: Jules and Nate 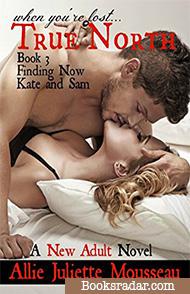 Lives are threatened when the Sovereignty's top agent, Noah Connor accepts the assassination assignment of the rebel leader, Rachel Lawton.

But when passions heighten, their courses of action and battles both within and without, are altered leaving both vulnerable and compromised.

Can Rachel stop the set up and thwart the traitors plans as she is being hunted down? Can Noah contain the conflict he feels within to save those dependent on him?

Life and death lies in the balance as love and lust are forged into a gripping conflict.

Stone Wright is Foreplay’s hottest act. While entertaining at the popular L.A. strip club known for catering to the feminine wild, the fever-inducing Aussie with the sex-saturated accent and moves to match is preparing for the audition of a lifetime on the sensational hit reality show Then Prove You Can Dance.

When retired principal dancer and ballerina Emilie Cartier stumbles into his dressing room, she’s still reeling from the one wrong spin that altered her entire life and obliterated her dreams.

After a humiliating public, albeit meteoric, orgasm—the kind so desperate to escape, it took over her body without her brain's permission—and a second, more intimate and deliriously deliberate one, Emilie makes a deal with Stone: he helps her get her dancing mojo back and she readies him for his national audition.

But she insists he keeps his wily, wandering hands to himself and his dirty mouth shut. Of course, that’s going to be an extremely hard challenge—one of herculean proportions.

Emilie is not prepared for Stone—the way he spins her mind dizzy, rocks her body into sweet oblivion or dirty dances into her every daydream—and falling in love with him is so definitely not an option.

The closer Stone gets to Emilie, the more he realizes he’d do anything to make her his own. Problem is, he’s a real f*ck-up with relationships. And that means he’s dangerously close to becoming her next major f*ck-up.

What happens when all of the emotional layers—along with the stage props, their dancewear and every last shred of their clothes—are ultimately stripped?

Brothers of Ink and Steel Series

Sophie Garner is a single mom who’s been raising her daughter on her own, fighting for both of their lives ever since going into hiding to escape her abusive husband.

When Sophie gets offered the job of a lifetime as the exclusive massage therapist for Josh “The Jackhammer” North’s team, it’s difficult to say no to the outrageous salary—and the bet—that Josh proposes. But for Sophie it’s a risk that could cost a lot more than just her heart – if she’s found, it could cost her her life.

Josh wants to break through Sophie’s fortified walls, but is unwilling to put the jackhammer to his own and reveal his secrets and the side of him few have ever known or seen. To do that, he’ll have to confront the darkness of his past.

I met her in a graveyard. She was cleaning broken glass from a concrete angel.

I should have gone on my way, but she gnawed at the edges of my mind and pulled me to her like steel to a magnet.

She acted tough, but I saw through the mask; she’d never make it out there on her own.

I was a streetfighter making a name for myself in the city’s underground fight clubs.

Together we clawed out our survival on the city streets. We became each other’s home – our somewhere we belonged.

She called us, two halves of one whole.

We protected one another.

I wasn’t there to keep her safe when she needed me most.

It’s been ten years since she slipped out of my life in the middle of the night.

But now, here she is, standing in front of me – no longer the a skinny, underfed teenage girl – but a stunningly beautiful woman.

Can I forgive her?

Can I forgive myself?

One thing I’ve come to understand:

Alpha-male, dirty-talking, MMA Light-Heavyweight Champion Josh North has only three days until the wedding to prove to single mother and greatest-love-of-his-life Sophie Garner that he is the only man she'll ever need!

As the wedding day approaches and Sophie begins to get cold feet, Josh comes up with a romantic scheme to prove his love and devotion--and employs all his brothers as Cupid’s messengers!

Sophie Garner answered yes in front of the entire world when Josh popped the question and the diamond ring dangled from his title belt, but is she really ready to take the plunge?

She’s been a single mother for almost three years, and she’s set in her ways, not used to sharing her life with anyone but her daughter, Charlie. Plus, she doesn’t know that she can ever escape the shadow of a past that still haunts her.

Sophie and Charlie are everything Josh wants in the world – but the heartthrob bachelor is learning that commitment and fatherhood are both tougher than training for the title fight! And even though he’d give his life for either of his girls, he’s not so sure he’s got what it takes to be a husband and daddy.

Will Josh win the roughest fight of his life, or will he go down for the count?

I never let myself get personally involved. But my assignment to apprehend Eduardo Miguel comes to a grinding halt when I find a missing federal witness held captive in his basement. It becomes fucking personal, fast! Keeping Farrington safe, even if it—or more likely she—kills me, is now my only mission. But she’s terrified and fights me at every turn. Earning her trust becomes more than a way to save both our lives, it’s like an addictive drug. I need it—I need her to put her faith in me.

When she begins investigating the hidden parts of my soul, I almost can’t deny her. I know I can protect her. I know I could pleasure her in one explosive night she’d always remember and I’d never forget. What I don’t know is how I could be falling so hard. There’s no way in hell I can let that happen; getting too close to me comes with an ominous curse that won’t be defied. I thought I had nothing to lose. I was wrong.

As a federal witness, I thought I was safe in the protective custody of the FBI . . . that is until I woke up chained in the monster’s basement. When a powerful and lethal soldier claiming to be a bounty hunter shows up, I’m not sure if he’s rescuing me or dragging me towards a greater hell. But after a series of experiences that defy death, the overwhelmingly sexy, dirty-minded, Navy Seal trained and hot blooded bounty hunter—who obviously plays by his own rules—just might win my trust. He is not an ordinary man. He’s strong, dark and deadly; his past is mysterious and his motives unreadable. He seems to be made of the stuff of myth and legend, and of ink and steel.

When death comes, can we defy it…again?

Connor Callahan, once a North House teen who shed his own blood to become a Brother of Ink and Steel, is now a powerful attorney and the Twin Cities’ most eligible bachelor.

He challenges stereotypes and melts panties with his rugged good-looks, colorful tattoos, and brazen piercings.

When he’s handed the case of a lifetime with the promise of partnership in the firm he’s dedicated his career to, he knows his destiny is close.

Then he gets a glimpse of the familiar Saint Sophia pendant his opposing council wears, and he finds himself wondering… could it really be her, the girl he met as a teenager?

He never thought he’d see the blond whirlwind again after she blew in and out of his life, but she was wholly unforgettable. Like a tattoo over his heart.

If only he could get close enough to be sure it’s really her… but she’s never going to let that happen.

Elle Hayes despises the formidable Mr. Callahan and everything he stands for.

Though he puts on an immensely charming act—and is hotter than the New Mexico sun—she knows he’s a fake.

There’s no way she’s going to let Callahan interfere with her objective: finding a home for the vulnerable orphans his client has torn apart.

As the tension—and heat—revs up between them, they discover that they each have a whole lot more to lose than just a court case. Their hearts are on the line—and so much more.

But will they decide those risks are worth taking?

Livie Morrisey is dreading seeing Jake after his heroic homecoming from Afghanistan. She's been in love with Jake North since she was a little girl, but he was three-and-a-half years older than her and her big brother’s best friend.

She was always nothing but the off-limits little sister – until the night before Jake left for the Army, when he'd given her her first kiss. They'd kept in touch for a year, but once Jake was deployed to Afghanistan, he'd cut off contact suddenly and she'd never heard from him again.

For the past three years Livie has kept herself distracted with homework and her university studies, but now Jake's going to be up close and personal. And Livie can’t decide if tonight's finally the night to prove to Jake she’s all grown up or the night she should let him go forever.

Nathaniel Morrisey thinks he has a handle on his affections for the one woman he’s ever cared about, Julia North, who happens to be his boss’s daughter and best friend’s little sister. But Jules is about to blow that calm self-control he's had a tight grip on all to hell.

The North brothers are wild, adrenaline-junky thrill-seekers who thrive on challenge, speed and danger. Their little sister, Jules, is a sweet, quiet, bookworm who’s been overprotected all her life by her hulking big brothers … but she is a North after all, so she has her own wild streak—a secret that none of them expected, especially not Nate!

Nate's desire to protect Jules—especially from himself and the overwhelming emotions he feels for her—have waged a war inside of him. He is plagued by painful secrets and shame because of a childhood full of abuse he knows he can never escape. How can he possibly love a woman like Julia North the way she deserves to be loved?

Julia North knows Nathaniel Morrisey is the only one for her, but with a past like a dark shadow, Nate's as turbulent as the wild horses he rides.

Will Jules be strong enough to hold on unconditionally, or will she decide it’s finally time to let go?

Rocker and Master's student Sam North knows no limits and seeks out every challenge to conquer and defy. With his cocky grin, piercings, colorful tattoos, undress-you bedroom eyes and magnetic sex appeal, he has no trouble finding women to warm his bed. When he spies his new professor, the gorgeous Ms. Jolie, she’s just another summit he wants to climb in order to reach its peak. But as he begins to catch glimpses of her soul, she becomes his Everest.

After a tragic accident that plays on an endless loop in her mind, wild child Kate Jolie died inside. She now functions only through her rigid, ironclad routine, which keeps her mind and soul in check – balancing her in a dangerously precarious position between life and death.