Julieanne Reeves was an American author of suspense and contemporary romance.

She was also a third generation Arizonan who specialized in Police-Fire-911 Communications.

Whenever she wasn't spending quality time with her two beautiful children, Julieanne would be found either reading or writing spicy romantic suspense.

Julieanne was lucky enough to have worked with some of the best Law Enforcement Officers in the nation, which is why it comes as no surprise that her heroes carry a badge and firearm.

Julieanne passed away on June 10, 2014 in San Tan Valley, Arizona, at the age of forty. 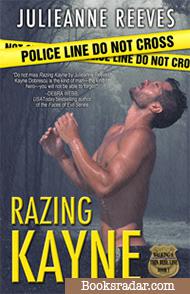 For two years, State Trooper Kayne Dobrescu has wanted only one thing: to understand why his wife inexplicably killed their children and then herself. Memories haunt his days and lay siege to his nights, leaving him questioning his reasons for living.

Jessica Hallstatt became a widow and single mother the night her firefighter husband died in a fiery explosion at an accident scene. While her husband may have died a hero, he left Jessica with deep emotional scars that haven't begun to heal.

When Kayne accepted a transfer to the mountain town of Payson, Arizona, he never expected to meet anyone like Jessica. From the moment he pulled her over for speeding, he was drawn in by her whiskey-colored eyes and sassy dimple. He knows she and her children are a forever type package, and he's vowed never to give anyone the power to destroy him again. Yet fate has other ideas, throwing Kayne and Jessica together in a fight against an unknown enemy to save the life of a child—and hopefully one another.