Burt Solomon is an American award-winning journalist and author of historical mystery and non-fiction books.

He is best known for writing Where They Ain't (1999), a non-fiction title on the history of baseball in the 1890s.

Born in Baltimore, he holds an undergraduate degree from Harvard. Although he joined the University of Texas in Austin to study a postgraduate degree in American studies, Burt dropped out after a semester and a half to pursue journalism in the real world.

He may have had stints with the Texas Observer and The Energy Daily, where he was first a reporter before becoming the editor at the latter, but it was while working as a staff correspondent at National Journal that Burt made a name for himself.

The recipient of the Gerald R. Ford Prize for Distinguished Reporting on the Presidency for 1991, Burt is currently a contributing editor at The Atlantic.

Burt and his wife live inside the Beltway, and his two children and three grandchildren live nearby. 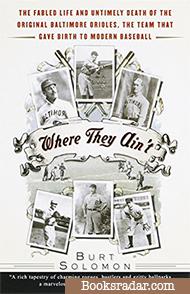 Where They Ain't: The Fabled Life and Untimely Death of the Original Baltimore Orioles, the Team That Gave Birth to Modern Baseball 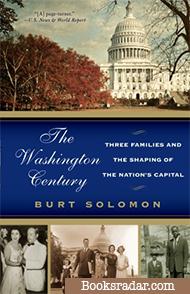 The Washington Century: Three Families and the Shaping of the Nation's Capital 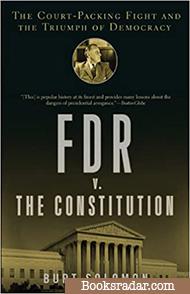 FDR v. The Constitution: The Court-Packing Fight and the Triumph of Democracy
The John Hay Mysteries 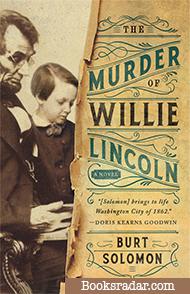 The Murder of Willie Lincoln 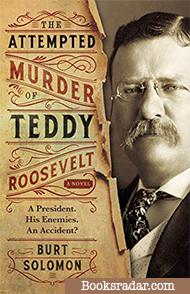 The Attempted Murder of Teddy Roosevelt

Where They Ain't: The Fabled Life and Untimely Death of the Original Baltimore Orioles, the Team That Gave Birth to Modern Baseball

Buy now
Like
Where They Ain't: The Fabled Life and Untimely Death of the Original Baltimore Orioles, the Team That Gave Birth to Modern Baseball

In the 1890s, the legendary Baltimore Orioles of the National League [sic] under the tutelage of manager Ned Hanlon, perfected a style of play known as "scientific baseball," featuring such innovations as the sacrifice bunt, the hit- and-run, the squeeze play, and the infamous Baltimore chop.

Its best hitter, Wee Willie Keeler, had the motto "keep your eye clear and hit 'em where they ain't"--which he did. He and his colorful teammates, fierce third-baseman John McGraw, avuncular catcher Wibert Robinson, and heartthrob center fielder Joe Kelly, won three straight pennants from 1894 to 1896. But the Orioles were swept up and ultimately destroyed in a business intrigue involving the political machines of three large cities and collusion with the ambitious men who ran the Brooklyn Trolley Dodgers.

Burt Solomon narrates the rise and fall of this colorful franchise as a cautionary tale of greed and overreaching that speaks volumes as well about the enterprise of baseball a century later.

Buy now
Like
The Washington Century: Three Families and the Shaping of the Nation's Capital

The Washington Century chronicles the hundred-year rise of the nation's capital as it grew to become the most powerful city in the world -- a story made vivid through the history of three very different families, each representing an essential aspect of Washington: the Cafritzes, headed by a real estate mogul and his consummate hostess wife; the Boggs family, a political force in the ultimate political town; and the Hobsons, led by a prominent black activist and civic leader in the first black-majority American city.

Veteran journalist Burt Solomon uses these families to explore everything from the customs of Washington's elite society to the expansion of the federal bureaucracy, the District's own struggle for self-governance, and the influential role that politics and, increasingly, lobbying have played in the city.

Buy now
Like
FDR v. The Constitution: The Court-Packing Fight and the Triumph of Democracy

In the wake of Franklin Delano Roosevelt's landslide re-election of 1936, the popular president-never anything but self-confident-unaccountably overreached.

Deeply frustrated by a Supreme Court that had blocked many of his New Deal initiatives, FDR proposed to enlarge it from 9 justices to 15. The now-famous "court packing scheme" divided Roosevelt's own party and inflamed the country at large, and it failed-humiliatingly for FDR-because the president could persuade neither the public nor the Senate of its virtues.

And yet, ironically, he could claim ultimate victory, for the Court that emerged from the revolution of 1937-its majority shifted from conservative to liberal-lasted for the next 68 years, until the recent Bush appointments have tilted it back.

Historian Burt Solomon, deeply steeped in Washington's lore, skillfully chronicles one of the great set pieces in American history, illuminating the inner workings of the nation's capital as the three branches of our government squared off.

The Supreme Court has generated many fascinating and dramatic stories, but none more so than that of the 168 days during which one of our greatest presidents attempted to outmaneuver the Constitution-an action that inevitably calls forth parallels with the present.

The Murder of Willie Lincoln

Washington City, 1862: The United States lies in tatters, and there seems no end to the war. Abraham Lincoln, the legitimate President of the United States, is using all his will to keep his beloved land together. But Lincoln’s will and soul are tested when tragedy strikes the White House as Willie Lincoln, the love and shining light in the president’s heart, is taken by typhoid fever.

But was this really the cause of his death? A message arrives, suggesting otherwise. Lincoln asks John Hay, his trusted aide—and almost a son—to investigate Willie’s death. Some see Hay as a gadfly--adventurous, incisive, lusty, reflective, skeptical, even cynical—but he loves the president and so seeks the truth behind the boy’s death.

And so, as we follow Hay in his investigation, we are shown the loftiest and lowest corners of Washington City, from the president’s office and the gentleman’s dining room at Willard’s Hotel to the alley hovels, wartime hospitals, and the dome-less Capitol’s vermin-infested subbasement. We see the unfamiliar sides of a grief-stricken president, his hellcat of a wife, and their two surviving and suffering sons, and Hay matches wits with such luminaries as General McClellan, William Seward, and the indomitable detective Allan Pinkerton.

What Hay discovers has the potential of not only destroying Lincoln, but a nation.

Buy now
Like
The Attempted Murder of Teddy Roosevelt

Theodore Roosevelt has been president for less than a year when his horse-drawn carriage is broadsided by an electric trolley. Roosevelt is thrown clear but his Secret Service bodyguard is killed instantly.

Roosevelt has earned enemies galore and is convinced of foul play. He sets John Hay, the secretary of state, to investigate. Hay will cross paths with Emma Goldman and J.P. Morgan to discover the truth… and along the way he will pick up a sidekick, the crusading journalist Nellie Bly.

Blending real events and novelistic logic, Hay uncovers a shocking solution that may protect the man who wants to transform the nation, but at the cost of upending the compass of his own life.