Stu Strumwasser is an American author of the suspense, mystery and thriller novel, The Organ Broker (2015).

Born in Queens, New York, he studied creative writing at Cornell University before pursuing careers in Wall Street and as a musician in the indie rock band, Channeling Owen

He exited Wall Street in 2006 and went on to start his own natural soda company, Snow Beverages; raising $3.5 million in angel financing and serving as its CEO for six years.

A keen lover of entrepreneurship, Stu currently lives in Brooklyn with his young identical twin sons. 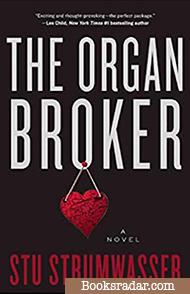 Jack Trayner first plunged into the criminal underworld as a youth, selling coke in an effort to finance his college education.

Although he finished law school, that didn’t stop him from being lured into the illegal organ trade.

Jack exceeded and excelled in his new endeavor, until a client’s death gave him a stern reality check.

The illegal organ trade is an international criminal enterprise that operates even as you read this.

As active as it is across various hospitals and cities around the globe, many people are oblivious of its very existence—until now.

This book is a confession by Jack Trayner, otherwise known as New York Jack.