Tim Weaver is a bestselling author of crime and mystery novels.

His mystery novels, which all feature missing persons investigator David Raker, have been selected for the Richard and Judy Book Club, shortlisted for a National Book Award, and nominated for both the Crime Writers' Association Dagger in the Library and Ian Fleming Steel Dagger awards.

He currently lives in Bath, a neighborhood in Augusta, Georgian where he works as a full-time writer. 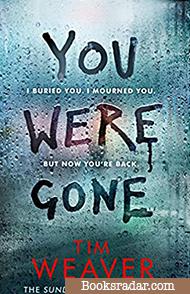 No One Home
Non-fiction Alex Towne disappeared without a trace six years ago.

Five years later, his remains are discovered in a car wreck.

Mary, his mother, however saw him on the street a week ago.

This is one assignment that David Raker, a missing persons investigator, doesn’t want to undertake for the simple reason that it’s a pointless mistaken identity case.

However troubled by a loss of his own, he hesitantly takes up the investigation.

It turns out Alex wasn’t as innocent as his mother thought he was.

Hidden in his past are secrets that should have stayed buried—and brutal men willing to do whatever it takes to protect the dark secrets.

What could make a straight-A student from a lovely family run away from home?

That’s the exact question that missing persons investigator David Raker asks himself the moment he is hired to find seventeen-year-old Megan Carver who mysteriously vanished six months ago.

Determined to help Megan’s parents get closure, Raker launches an investigation which takes him through a surprising chain of shock and deceit.

And when those close to Megan end up either dead or too petrified to talk, Raker finds himself heading towards the woods on the edge of the city; one renowned for hosting a deranged serial killer.

Sam Wren is one of the millions of Londoners who use the tube train.

The only difference is that he got onto the tube train one December morning—and never got off. No eyewitnesses and nothing useful on the security cameras.

But as Raker carries out his investigation, he learns that even the police aren’t being sincere.

Someone knows exactly what happened the day that Sam mysteriously vanished, and he will do anything to ensure the secret remains hidden.

Upon arriving at her sister’s house, Emily Kane is surprised to find the front door unlocked.

Even more shock awaits her inside the house. Dinner is still cooking, the TV is on while Carrie, her husband, and their two daughters are nowhere in sight.

When the police fail to find any leads, Emily seeks the help of David Raker—her ex-boyfriend who so happens to be a missing persons investigator.

And as he undertakes his investigation, Raker finds proof of an ominous cover-up that has not only been in the making for decades, but has also left a long trail of blood behind.

Everything seemed perfect for Leonard Franks and his wife, Ellie, when they left London for their dream retirement in the quiet and picturesque Dartmoor—until he mysteriously disappeared one day after going to fetch firewood from the back of the house.

But as he soon learns, behind Leonard’s disappearance lies a terrible secret.

This is one secret that may not only cost Raker his life, but that of his loved ones.

David Raker is gifted when it comes to finding the lost—whether dead or alive.

But despite his impressive record, the missing persons investigator has never been able to save one person.

Colm Healy made a name for himself as one of the Met's best detectives—until a cold case involving the killing of a mother and her twin daughters destroyed his career, his family and his life.

Now joining hands with Raker, the two must attempt to catch a killer who patiently watches and prepares to ensure that the truth will never be revealed.

This wasn’t just a murder. It was something more sinister…

"How can someone just disappear?"

A woman mysteriously vanishes while driving to a stunning headland overlooking the Devon coast, never to be seen again.

Where could he have possibly gone to? Did she know something?

While carrying out his investigation, Raker discovers that the woman was recently widowed from a secluded film director.

Did she discover a shocking secret about her husband that forced her to take off?

Raker’s quest to uncover the truth will place him in terrible danger.

A young man wakes up bruised with no recollection of whom he is or where he is from, earning him the nickname 'The Lost Man' by the press.

Ten months later, Richard Kite—if at all that is his real name—is still on a desperate mission to find who he really is.

With the police not offering much help, Kite turns to private investigator David Raker—a man renowned for his gift of locating missing persons.

Raker however has more questions than answers.

Who exactly is Richard Kite?

Why doesn’t anyone know him?

And how is he linked to the remains of a woman found beside a London railway line two years ago?

A woman walks into a police station three days after Christmas. She has no possessions, except a piece of paper with the name David Raker on it.

Furthermore, she claims that Raker is her husband.

Upon arriving at the station, missing persons investigator David Raker is shocked at the discovery that the woman looks exactly like his wife.
She also seems to know everything about their marriage, their history, and very private details.

The only problem is that Raker's wife died eight years ago.

When her claims that Raker had a breakdown are proven by a renowned doctor, and he is further accused of a disappearance, the private investigator suddenly finds himself fighting for his memories, his sanity, and his life.

Residents of Black Gale gathered for a dinner party on Halloween.

They ate, drank and made merry, playing games and take photographs before disappearing without a trace by the following morning.

With no bodies, no evidence and no leads, the events of Black Gale still remain a mystery two and a half years after they occurred.

Desperate, the families of those who vanished solicit the help of missing persons investigator David Raker.

And it doesn’t take long for Raker to become obsessed with the case.

What could the neighbors have been hiding from their families—and from each other?

Throughout the stretch of an entire season, the show explores the world of missing persons—looking at who disappears, why they vanish, the pressures of life on the run, and who tracks them down—charting the progression of a missing persons search.

Join Tim as he meets with top experts from various investigation fields such as surveillance, data, forensics, psychology, and technology.

And in every single one of the interviews, he challenges them, and himself, with the toughest question of them all: is it really possible to disappear?