Søren Sveistrup is a Danish scriptwriter and author of mystery, thriller and crime fiction books.

Born in Denmark and adopted at birth after his biological mother gave him up, having gotten pregnant at a young age, Sveistrup overcame the odds to become accomplished in his field.

He holds a Master in Literature and in History from the University of Copenhagen, and also attended the Danish Film School.

An internationally acclaimed scriptwriter, Sveistrup is best known for writing the Danish television show, The Killing, which not only received multiple international awards, but also got sold in over a hundred territories.

Sveistrup is also lauded for writing the screenplay for The Snowman novel by Jo Nesbø.

Some of his accolades include an Emmy for “Nikolaj and Julie”, and a BAFTA for “The Killing”. 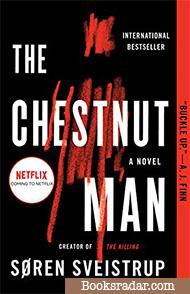 A psychopath is terrorizing Copenhagen.

His calling card is a “chestnut man”—a handmade doll made of matchsticks and two chestnuts—which he leaves at each bloody crime scene.

Examining the dolls, forensics makes a shocking discovery—a fingerprint belonging to a young girl, a government minister’s daughter who had been kidnapped and murdered a year ago.

A tragic coincidence—or something more twisted?

To save innocent lives, a pair of detectives must put aside their differences to piece together the Chestnut Man’s gruesome clues.

Because it’s clear that the madman is on a mission that is far from over.

And no one is safe